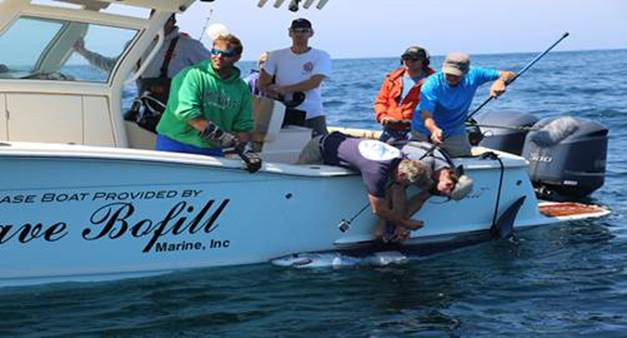 Team entries are now being accepted for a maximum of 50 boats to compete for thousands in cash and prizes during this two-day tournament. The entry fee is $750 through May 1st and $950 after that date.

After its history-making debut in 2013, the Shark’s Eye Tournament and Festival at Montauk Marine Basin in Montauk, NY, is back and bigger than ever, on July 11-13, 2014.

This is the first and only satellite tag, all-release shark tournament in the Northeast U.S. With a format designed to ensure the post-release welfare of all sharks caught, including rules requiring the mandatory use of circle hooks, heavy tackle and safe handling practices, it is recognized as one of the industry leaders for the Next Generation of Shark-Release Tournaments.

According to one Shark’s Eye creator and organizer, Carl Darenberg of Montauk Marine, “Great, competitive anglers make great tournaments and we are excited to step up the level of participation and stakes this time around.”

With tens of millions of sharks killed by foreign commercial fishermen every year, many to fill the demand for shark fin soup in Asia, one of the tournament’s primary goals is to bring attention to the plight of sharks and to help bring back the large sharks that are disappearing from our waters. Likewise, there is growing concern by the charter boat industry that sharks need conserving or there won’t be any left to sustain that business.

Shark’s Eye has succeeded in uniting fishermen, scientists, conservationists, educators and concerned celebrities. Participating scientists and their teams will attach satellite tags to some eligible species, such as mako, thresher and blue sharks to monitor their movements after release. Competitors and the public can then track their movements on the OCEARCH Global Shark Tracker website — the most followed shark tracking site and app in the world. Last year, teams on ten boats participating in the tournament, tagged and released 64 sharks, among which were 33 mako and 31 blues. None were killed.

Three of the four sharks fitted with the tags are still pinging in. After spending months of time in the mid-Atlantic, Rizzilient’s tag showed up on the coast of Portugal after more than a month of silence. OCEARCH’s collaborating scientists believe Rizzilient, a shortfin mako, was caught by a commercial fisherman in the mid-Atlantic and the tag was brought back to the port. OCEARCH is currently in the process of trying to locate the tag and confirm the facts. April, another mako, has been hunting off the Maryland coast. And Beamer, the 200 lb. blue shark named by students at the Montauk school has traveled more than 6,000 miles and is now off the coast of Panama. Tagging operations in 2014 will again be led by Dr. Greg Skomal and Dr. Nancy Kohler. Satellite-tagged sharks will be named by competing anglers and local school children.

As last year’s winner Richie Nessel said, “It’s the most fun I’ve ever had in a fishing tournament!”

The tournament and festival is supported by sponsors. All businesses or individuals interested in getting involved to sponsor and support the event are urged to contact event organizers. Current sponsors include Montauk Marine Basin, the Guy Harvey Ocean Foundation, OCEARCH, Andrew Sabin Family Foundation, Mote Marine Laboratory, AFTCO, Montauk Boatmen and Captains Association, and the Concerned Citizens of Montauk. “The Shark Brothers,” Sean and Brooks Paxton of Think Out Loud Productions, are back again this year to produce the tournament and festival.

The event will also continue its support of the Wounded Warrior Project by hosting a team of veterans competing with a boat and entry provided courtesy of artist Eric Fischl.

While competition heats up on the North Atlantic, there will be plenty of fun and excitement for the entire family on shore at the tournament and festival host location, the Montauk Marine Basin. The companion, shark-themed festival is free to the public and will feature event sponsors, along with a wide variety of merchant vendors, unique attractions, interactive demonstrations and lots of delicious food and beverages, all on the waterfront, during the entire weekend.

To track the sharks go to: www.ocearch.org

An aggressive publicity campaign for a tag and release shark tournament results in 75 articles in leading U.S. media. Here is one result of which we’re proud.